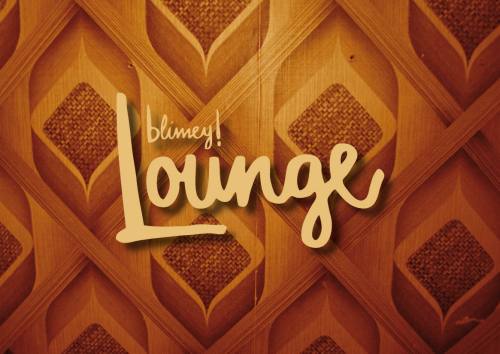 This was an exciting two day event hosted by blimey! – the Darlington based artists collective in 2011. Held in the East Hall of Darlington Arts Centre, the event featured over 20 selected artists, and included performance, painting, sculpture, installation, illustration, music, textiles and intervention.

Featured artists responded to the theme of ‘lounge’ and all had connections to Darlington through their creative practice. A programme of events throughout the day included artists showing, performing and creating work.

Thanks to F.R.A.D.E, Darlington for Culture and Darlington Borough Council

Wall of unoriginality. Acrylic on canvas. 2011

During the 60’s and 70’s, in many lounges, hung mass-produced prints, big-eyed figures, gypsy women, crying children, all classed as kitsch. They were works executed to pander to popular demand alone and purely made for commercial purposes rather than works as a self-expression by the artist, making cheap objects that are unoriginal. Amanda has produced unoriginal acrylic versions of kitsch art, unsubstantial, inferior and gaudy.

Televisions have gone from a small box standing in the corner of the room to enormous wall-mounted sets that overpower the living area. People have turned
televisions into wall art, ever changing pictures of light, pixels of colour, taking the place of paintings. Amanda has produced four canvases of colour  pixels to compete with any plasma TV!

Emily’s work has been created looking at everyday life, specifically Northern working class life and she has been heavily influenced by Darlington. Her
works consists of illustrative silk screen prints on fabric and paper. Emily is interested in looking at chav culture and creating work which makes people laugh. Although her theme is very modern she is passionate about using traditional techniques, all her work is hand drawn and hand silk screen printed.

Sue and Al’s piece is a mixed media work that combines hand crafted bird tables, vintage plates and laser cut Perspex birds. Whilst the individual bird
tables are practical objects in their own right, ‘Bird Table’ references the fragility of balance between ourselves and nature.

Eden Dance Works are a company of 5 dancers who work together around different concepts and ideas. When we think of living spaces we think of relaxation, a haven space, a place of security and comfort. In our personal space we can become a new person, delve into the depths of our own thoughts and enjoy the personality of our home. For Blimey Lounge Eden Dance Works want to recreate a feeling of living space in a public place through contemporary dance.

The name of our performance piece is “The Utopian Lounge Lizard Society” a wry look at the bourgeouise and proletariat in the time snapshots of 1937, 2011 and 2063, the cyclic nature of modern society and the rise of consumerism……and a look into the future……..three linked spoken word and sound performances, drawing inspiration from books written by George Orwell, Jane Austen, Oliver James and Aldous Huxley, repeated each evening, inviting audience participation and written reaction along the way….

A domestic vessel used every day, decorative – part of the furniture. This piece follows on from a recent series of print work exploring the relationship between ownership, collection, display and female identity. By using a piece of everyday ‘Lounge’ furniture the female form is contained within, safe yet trapped, unable to escape.

I am going to use a display cabinet that was once used to display 70 toy red busses to display collections of items that I seem to have randomly horded. I don’t know why, but I just have them. Lounges have been places where people display their collections, whether it is china plates or crystal vases. I think the random collection will seem odd with everyday items that have no value what so ever, such as used batteries, corks from wine bottles and shop receipts.

I consider myself to be an appropriator. I am interested in the reception of the reproduced and of artwork received at a remove. For blimey! Lounge, I have
selected an image that belies a complex state of bitterness, anxiety and dismembered in isolation. Enlarged to actual scale is an area of Philip Guston’s painting: ‘Head’ 1975. Specifically chosen for the event, the image stresses the current upheaval which I believe the country is enduring.

Norma’s practice focuses on the appropriation of un-wanted, un-loved, discarded or found items. These are transformed into 3D altered objects bringing narrative into the physical realm. Her production process is destructive, employing the medium of drawing through cutting, tearing, shredding, burning or defacing, effectively reversing the production process and often rendering the altered item unusable in its original content. Nora is a celebration of a life, in words and pictures, for your interpretation.

John’s passion for classic cars and their more traditional leather, chrome and veneer interiors, evokes memories of a past era. John has configured two leather front seats from a 1960’s Vanden Plas vehicle, in contrast to their original need for absolute functionality, he has placed them in a non restricted space in the form of a love-seat.

These particular works explore stillness; being at rest. In the silence, aspects of the self emerge; both the light and
the dark. The creative process involves not only the making of a visual image, but an emergence and acceptance, leading to a subtle personal transformation. The titles are simply the month in which the image was created. Deirdre is an artist and a tutor and now runs Darlington Art Club who offer courses in drawing, painting and print-making. Website: http://www.deirdremccrimmon.co.uk or http://darlingtonartclub.blogspot.com

Share and Care. A typographic interpretation of the number 100. 2010

Instead of taking a mathematical or scientific approach to the number 100 Amy wanted to convey a good message to the world, despite it being somewhat ‘cheesy’. The number seeming so whole yet made for dividing, resulted in Minto’s Share and Care ‘a box of love’. Amy has produced a pyramid of boxes as if they were in a 1950’s supermarket. Visitors to the exhibition are invited to take away one of these boxes, so they each have a little piece of Minto’s Share and Care. 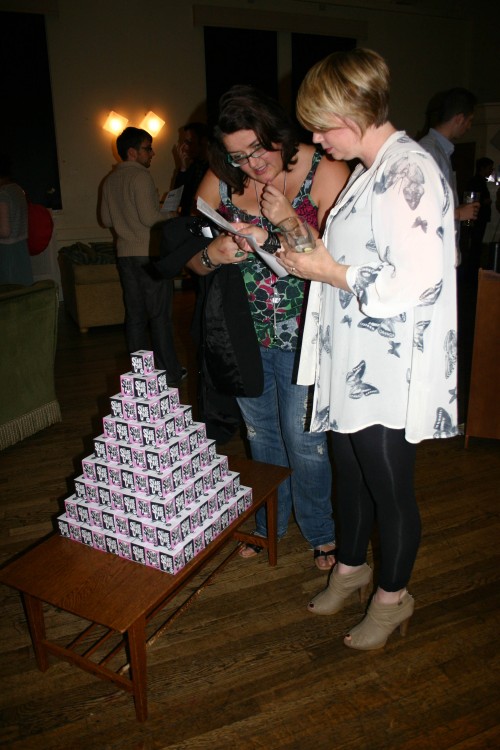 Hugh Mooney and Kevin Holroyd are old theatre luvvies who are still playing at an age when they should know better and be wearing Marks and Spencer’s Cardies, but they don`t and they aren`t. Hugh is a shameless artist, serial collagist, book and magazine murderer. Kevin is unrepentant actor and drama instructor with a passion for all things improvised and Japanese. Both are having a multiple rampant affairs with objects, symbols, language and identity and they don`t care who knows it. 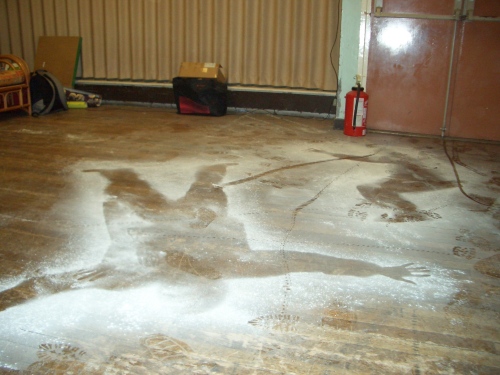 Taking inspiration from the typographical world around us – both good and bad, Nicola will interpret the space of lounge in a text based way. Drawing on a sourced item of second hand furniture she will decorate it with words and selected text inspired by the lounge theme. These responses may be controversial or unexpected within a lounge setting. They may shock or horrify, bewilder or spark a reaction. The item will be created on the Friday evening event and will remain as part of one of the lounge areas for the remainder of the event. www.nicolaparkin.com

Julie is interested in the concept that fabric can hold so many emotions. Apart from our mothers skin, fabric is the first material we encounter in this world, is it any wonder that our responses to fabric in later life are so charged with memory. Cloth is literally saturated with meaning; it charts our passage through life, a tactile record of associative experiences and sensory triggers. Some of her creations are fabric diaries documenting the unconscious acts we do everyday. Others are symbolic sculptures soaked in everyday materials, telling stories of a lost loved one or the growth of her two children.

An ongoing body of work based on the different systems that people create and use to organise and index their music collections. This revelatory series
of illuminating confessions was inspired by conversations with family and friends, during which the merits of various organisational strategies were debated. The points of contention and domestic practices thrown up during these initial discussions formed the basis of this project.

A series of painted signs which respond to the ongoing closures of communal spaces and to the loss of these venues as places of entertainment, community, shared values and experience.

A looped video piece featuring a sequence of endings. The spaces before and after the last few seconds of recorded sound act as silent parenthesis in the ennui of the task being performed. 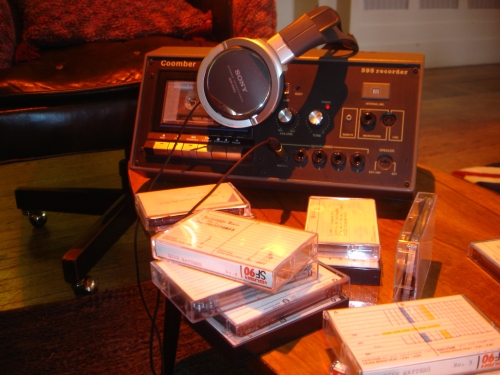 Callum’s pieces both interact with and mimic the idea of ‘the lounge’ in terms of its space and inhabitants. They teeter with the absurdity of bringing the outside world into the indoor context. Caught suspended in a void between function and error the work projects audible statements concerned with the consumption and eradication of public and private space.